I’ve mentioned FDAP withholding which applies to some classes of non US investors in various articles here –
https://htj.tax/?s=fdap+withholding
Nonresident  alien individuals and foreign corporations are subject to withholding tax  on a gross  basis  on U.S.  source income not  effectively connected with the conduct  of  a trade or business  within the United States  (aka FDAP  income)  under  §§  871(a)  and 881.   This income is subject  to withholding on the gross  amount  of the payment,  without  any  deductions,  at a rate of 30%.   Examples of FDAP  (fixed or  determinable  annual  or periodical) income include interest,  dividends,  rents  and royalties.   The 30%  withholding tax is  due under  §§  1441 and 1442 at the time of  payment.   Income that is,  or is  deemed to be, effectively connected with the conduct  of  a trade or business  within the United States (ECI)  is not subject  to withholding  under  §  1441 or  1442. However, see §§  1445 and 1446 for  examples of  when ECI  may  be subject to withholding.
But let’s get into it in more detail here.  When a person refers to FDAP income, they are referring to income which is generally considered investment or passive income. FDAP refers to Fixed, Determinable, Annual and Periodic. Otherwise, when the income is ECI, it is considered Effectively Connected Income. FDAP income carries a 30% withholding off the top, while ECI is taxed at graduated rates — and deductions can apply.  FDAP and ECI income relate to nonresident aliens (NRA) and other persons who are being taxed as non-U.S. persons. The IRS has provided some guidance on these different types of income, but the FDAP vs ECI analysis is complex.

Fixed, Determinable, Annual, or Periodical (FDAP) income is all income, except:

Income is fixed when it is paid in amounts known ahead of time. Income is determinable whenever there is a basis for figuring the amount to be paid. Income can be periodic if it is paid from time to time. It does not have to be paid annually or at regular intervals. Income can be determinable or periodic, even if the length of time during which the payments are made is increased or decreased.

Tax at a 30% (or lower treaty) rate applies to FDAP income or gains from U.S. sources, but only if they are not effectively connected with your U.S. trade or business. The 30% (or lower treaty) rate applies to the gross amount of U.S. source fixed or determinable, annual or periodical gains, profits, or income. Deductions and netting are not allowed against FDAP income.

The following items are examples of FDAP income:

If you were present in the United States for 183 days or more during the tax year, and you are still a nonresident alien, your net gain from sales or exchanges of capital assets is taxed at a 30% (or lower treaty) rate. For purposes of the 30% (or lower treaty) rate, net gain is the excess of your capital gains from U.S. sources over your capital losses from U.S. sources. This rule applies even if any of the transactions occurred while you were not in the United States. The183-day test mentioned above is not the same as the 183-day test used in the substantial presence test. See The Taxation of Capital Gains Of Nonresident Alien Students, Scholars and Employees of Foreign Governments for further information.

If you were in the United States for less than 183 days during the tax year, you will not be taxed on your capital gains, except for the following types of gains:

Many tax treaties contain provisions which reduce or eliminate taxation on capital gains.

What Capital Gains Are Taxed?

Income derived by an insured nonresident alien from U.S. sources upon the surrender of, or at the maturity of, a life insurance policy, is FDAP income. The proceeds are income to the extent they exceed the cost of the policy.

However, certain payments received under a life insurance contract on the life of a terminally or chronically ill individual before death (accelerated death benefits) may not be subject to tax. This rule also applies to certain payments received for the sale or assignment of any portion of the death benefit under contract to a viatical settlement provider. See Publication 525, Taxable and Nontaxable Income, for more information.

Covenant Not to Compete

A fee paid to a professional athlete, such as a soccer or hockey player for “signing on” with the effect of preventing any other team from negotiating with the player and preventing the player from negotiating with any other team is pay for a covenant not to compete. The source is the place where the right to play is given up. If a league is made up of both foreign and U.S. teams, the fee is from sources partly in and partly outside the United States. The part of the fee that is from U.S. sources is subject to withholding. If there is no reasonable basis for an allocation of the fee, the entire sign-on fee is income from the United States and is subject to withholding.

The general rule is that the interest payments to the foreign parent are FDAP and subject to a 30% withholding tax. The 30% withholding is required to be paid directly to the IRS before the interest is paid offshore. Thus, the parent corporation would only receive 70% of any interest paid. There are two exceptions to the general rule, the portfolio debt exception and certain preferential tax treatment based on a treaty between the US and the jurisdiction of the parent corporation.

The portfolio debt  exemption can arise in various  factual scenarios,  not only when the U.S.  Withholding Agent is  a Financial  Intermediary  Payor (UIL 9424.01-01).
PORTFOLIO  INTEREST DEFINED  In general, portfolio interest is:
(A)  Non-effectively connected  interest  that   would be taxable under either  §  871(a) or  §  881(a)  but for  this subsection,  and
(B)  The interest  is paid on an obligation (debt)  that  is either  in bearer  form or  registered form.   The interest income that  the foreign lender  earns must  not  be effectively  connected  to the lender’s U.S.  trade or  business
CAUTION: Obligations in bearer form issued after March 18, 2012, do not qualify for the portfolio interest exemption due to the repeal of § 163(f)(2)(B). Thus, for obligations issued after March 18, 2012, only debt in registered form can qualify for the portfolio debt exemption. See Notice 2012-20.

Portfolio interest is entirely exempt from the 30% US withholding tax. To qualify as portfolio interest, the loan must be from a foreign lender and the following requirements must be met:

The portfolio debt exception does not rely on any treaty. Therefore, it applies to lenders from any foreign country. 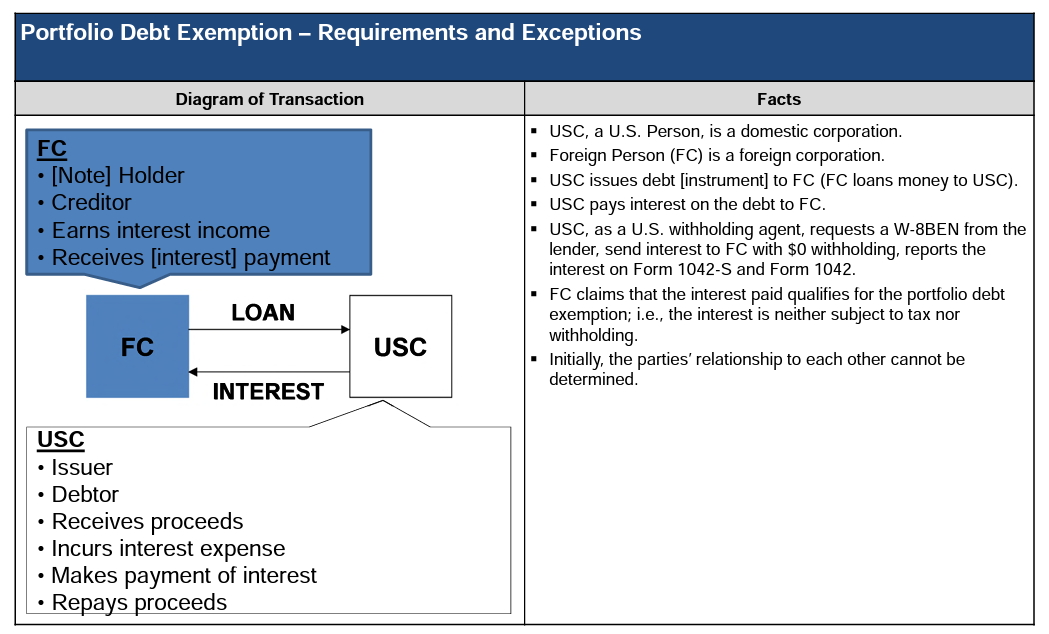 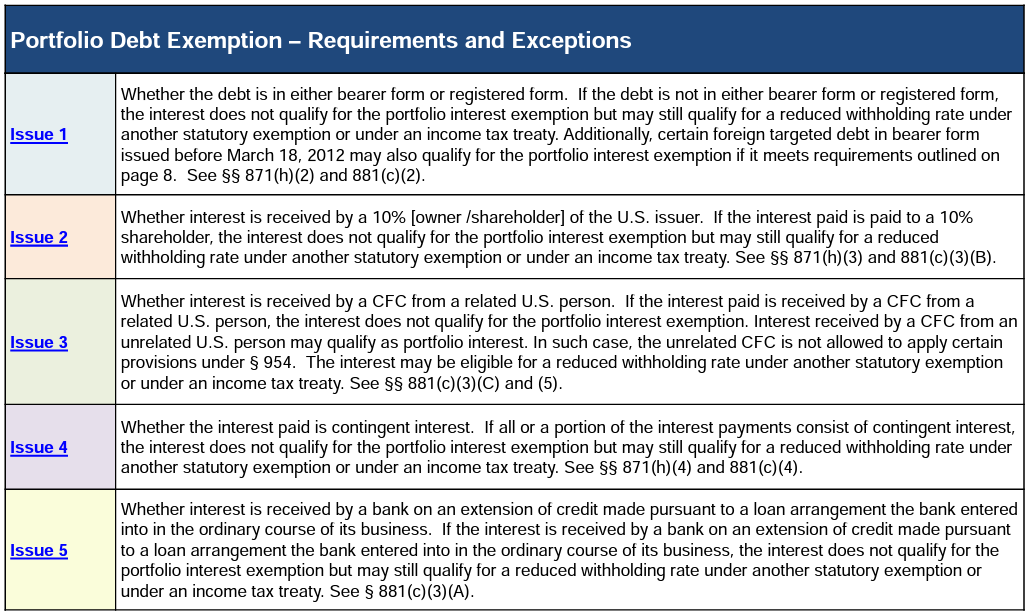 Most of the structuring to qualify for the portfolio exemption revolves around making sure that the foreign lender does not own 10% or more of the voting stock of the blocker corporation either directly or indirectly. The 10% testing is done at the shareholder level of the foreign parent and the shareholders are considered to proportionately own stock held by that corporation. In testing for ownership, there are attribution rules that apply and can make the calculations quite complex. For example, a son is deemed to own the stock held by his father, any person holding options to purchase stock are treated as owning the stock, partners in a partnership are deemed to hold a ratable share of the stock held by the partnership, etc. 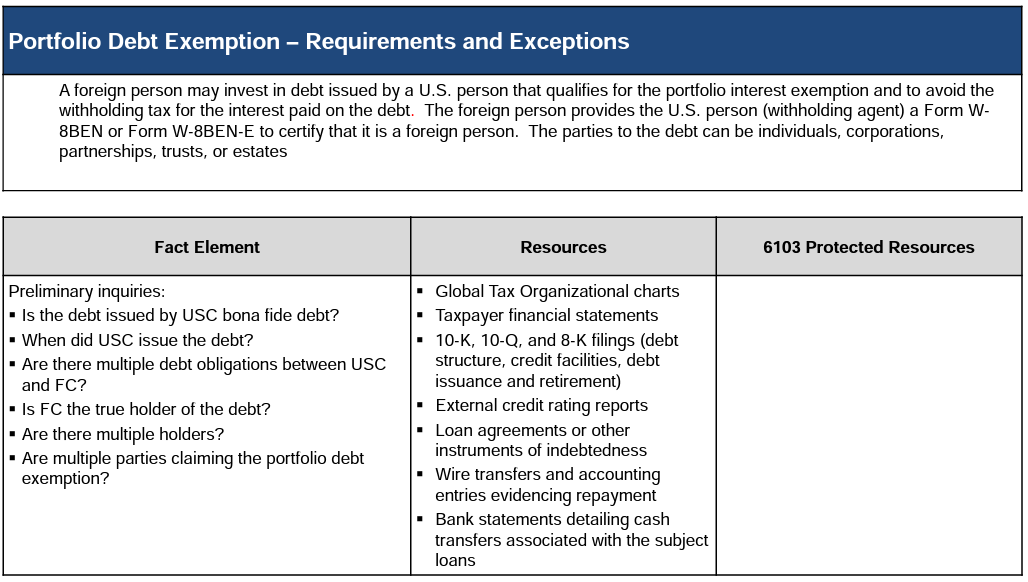 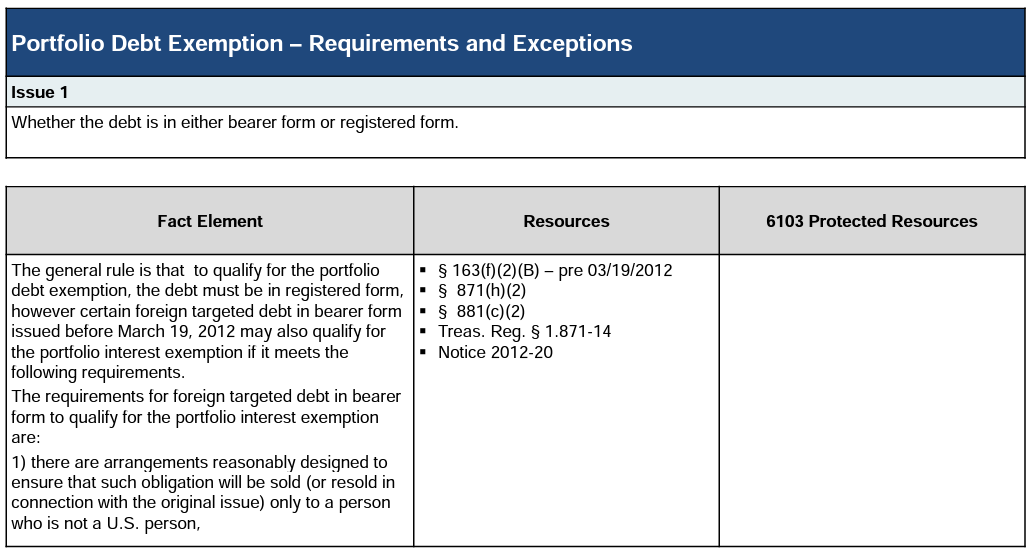 If all or a portion of the interest payments consist of contingent interest, the interest does not qualify for the portfolio debt exception, but may still qualify for a reduced withholding rate under an income tax treaty. 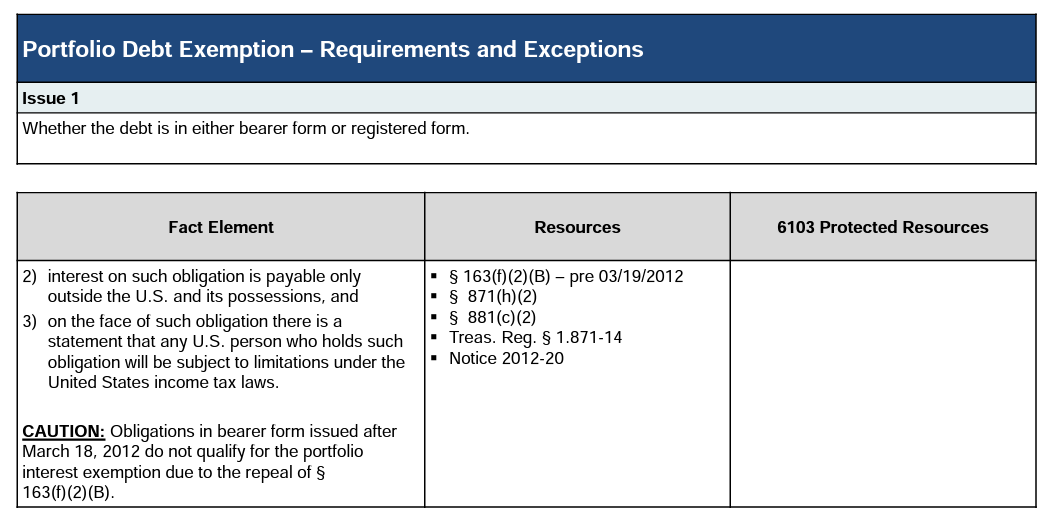 The interest may still be exempt or subject to a reduced tax rate under an income tax treaty even if the portfolio debt exception does not apply.   If a treaty provision is used, the foreign corporate lender can own 10 percent or more of the voting stock of the blocker. Contingent interest does not qualify under the portfolio interest exception. However, some treaties allow contingent interest to be tax free.

The blocker needs to receive a completed and signed Form W-8-BEN-E from the foreign lenders notifying it of the lenders foreign status to comply with the FDAP withholding rules and the FATCA requirements. Under the FATCA rules, the 30% withholding tax is required unless the W-8BEN-E form has been properly filled out and provided to the withholding agent prior to the interest being paid. Some of the information that must be provided on the form are the foreign lenders FDAP and FATCA status codes, and their global identification number. The withholding agent does not file this form with the IRS, but they will keep it in their files in case audited by the IRS. The W-8BEN-E also needs to be updated every three years.   If the blocker cannot produce the W-8BEN-E on audit, the IRS will assess the 30% withholding tax.

The blocker will prepare and file IRS Forms 1042 and 1042S annually, informing the IRS of the amount of interest it paid the foreign lenders. Any exemption or reduced rate of withholding will be noted on the form when filed. The forms also provide the IRS the FATCA information that it requires.

Foreign corporate parent lenders to inbound US real estate blockers can avoid withholding tax under the portfolio debt exception or a tax treaty with proper tax structuring, documentation and compliance. It is important to make sure everything is in order and properly documented prior to any interest payment being made.