Pillar 2 and Its Potential Impact on Caribbean Offshore Jurisdictions 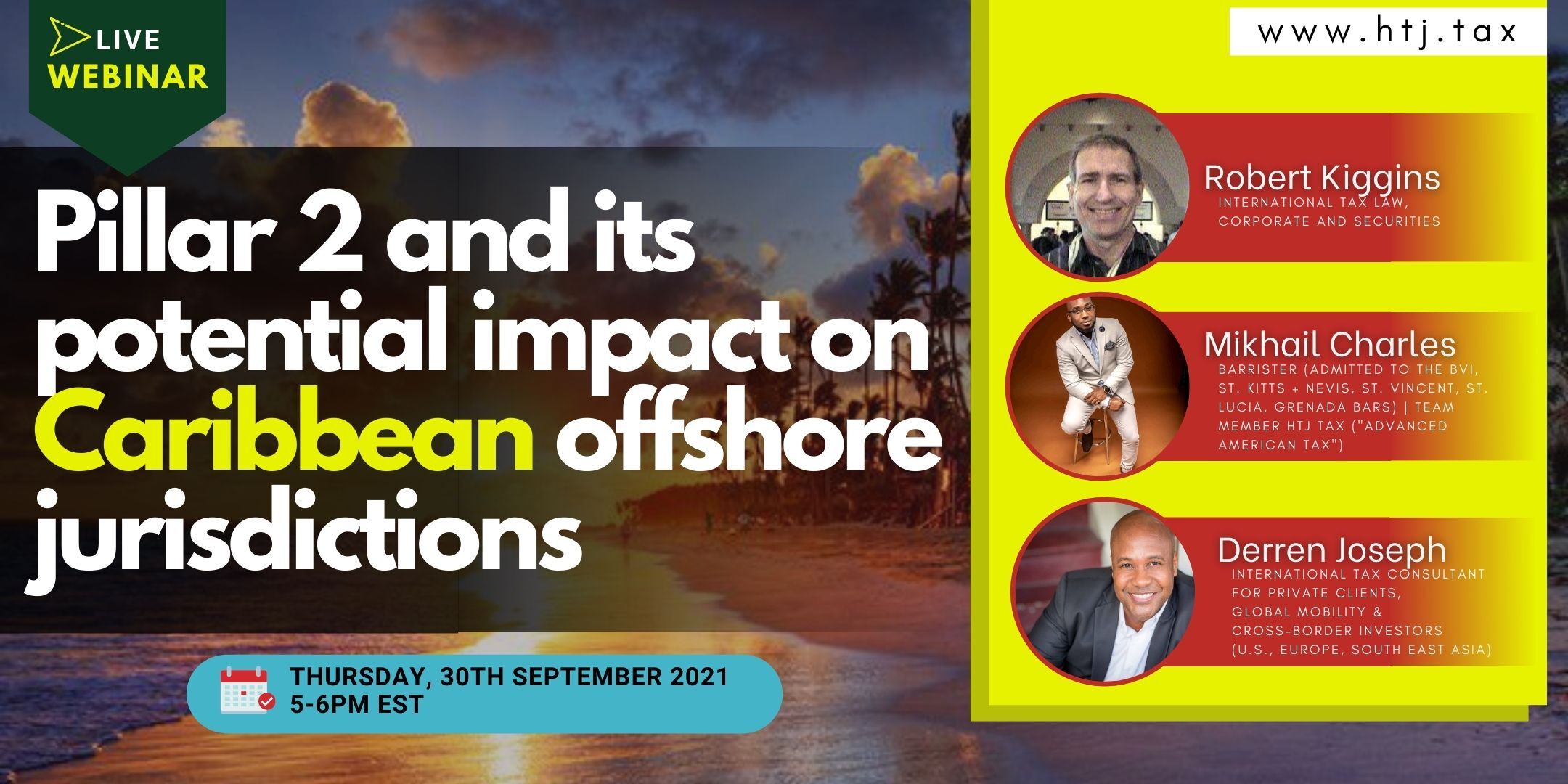 1.      This is a memo in respect of research conducted in advance of the live webinar event “Pillar 2 and its potential impact on Caribbean offshore jurisdictions”, this event is scheduled for 30 September at 5 – 6 PM EST.

What are the Pillars?

2.      Pillar One proposes changes to traditional “nexus” rules for allocating taxing rights, enabling a portion of the revenue generated by large groups from automated digital services (and, possibly, some consumer facing businesses) to be taxed in the jurisdiction in which they are used. This pillar details the different technical issues that need to be resolved to undertake a coherent and concurrent revision of profit allocation.

3.      Pillar Two (also referred to as the “Global Anti-Base Erosion” or “GloBE” proposal) relates to the possible introduction of a “global minimum tax rate”, by creating new taxing rights for jurisdictions whose taxpayers do business with low-tax jurisdictions. This pillar describes the work to be undertaken in the development of a GloBE proposal that would, through changes to domestic law and tax treaties, provide jurisdictions with a right to “tax back” where other jurisdictions have not exercised their primary taxing rights or the payment is otherwise subject to low levels of effective taxation.

4.      The development of the GloBE proposal under pillar two in particular contemplates radical new principles of international taxation which would extend beyond the sphere of purely digitally focused businesses by way of:

An income inclusion rule that would tax the income of a foreign branch or a controlled entity if that income was subject to tax at an effective rate that is below a minimum rate.

An undertaxed payments rule that would operate by way of a denial of a deduction for a payment to a related party if that payment was not subject to tax at or above a minimum rate.

A switch-over rule to be introduced into tax treaties, which would permit a residence jurisdiction to switch from an exemption to a credit method where the profits attributable to a permanent establishment or derived from immovable property are subject to an effective rate below the minimum rate.

A subject-to-tax rule that would complement the undertaxed payment rule by subjecting a payment to withholding or other taxes at source.
5.      Pillars one and two would clearly represent a significant change to the international taxation landscape and so developments will need to be closely monitored with respect to structuring considerations for financing multinational groups.

Caribbean / Offshore Structures and their use

6.      The current state of play in respect of tax rates in the Eastern Caribbean / Caribbean
Proper are:

7. There are certain countries that the EU considers as having sub-par tax governance standards. Such countries are included in the list of “non-cooperative jurisdictions”.

8. As at the date of the webinar, the EU’s Economic and Financial Affairs Council list of non-cooperative jurisdictions[1] are 12-fold: American Samoa, Anguilla, Dominica (new), Fiji, Guam, Palau, Panama, Samoa, Trinidad and Tobago, US Virgin Islands, Vanuatu and the Seychelles.

9. The inclusion of a jurisdiction on the EU blacklist may be a relevant factor for multinationals to consider when selecting an international offshore financial centre, particularly because EU member states are expected to implement, from 1January 2021 at the latest, defensive measures with respect to non-cooperative jurisdictions, such as withholding taxes, non-deductibility of payments and denial of certain tax exemptions and payment to an entity resident there may be reportable, under hallmark C in the DAC 6 reporting rules.

10. The planning of effective financing of offshore operations will also involve close examination of the structure through which such arrangements are to be made (as well as the location of the entities that participate in that structure).

11. A local holding company may be used to finance the local operating company, rather than have a parent directly lend to a local operating company. If the acquisition of a target company is to be made, a holding company structure may well be very effective. The effectiveness of the structure will depend on the tax regime in the holding company’s jurisdiction and, in particular, the availability of deductions for interest payments. An intermediate holding company may be useful in converting onetype of income, for example, interest income, into another type of income, for example, dividends, which may reduce the effective tax rate of the multinational group. In many locations, it will be possible to group the holding company and the target for tax purposes, allowing the cost of finance to be set off against the trading profits of the target company.

12. If the effective rate of tax in the UK is higher than that of the jurisdiction in which an offshore company is incorporated, it is, generally, fundamental that the tax residence of the offshore company is kept outside of the UK. Not only must the company not be incorporated in the UK, but the central management and control of the company must not be exercised in the UK. Even with the company resident outside the UK, the impact of tax legislation such as the controlled foreign companies (CFCs) provisions will need to be considered.

13. It should be pointed out that there has, in the past, been consideration of dual-resident company structures, which, if effective, allow the parties to obtain an interest deduction in both jurisdictions in which such companies are resident. This is based on a company satisfying an incorporation test in onejurisdiction and a central management and control test in the second jurisdiction.

14. However, in several countries (including the UK), specific anti-dual resident legislation has been introduced and, in the UK, the use of dual-resident companies has been effectively eliminated. Under UK legislation introduced in the Finance Act 1994, if a company is dual-resident in both the UK and another country but, under the tie-breaker clause in the double tax treaty between the twocountries, the company is treated as resident in the other country for treaty purposes, the company is treated as non-UK resident for all UK tax purposes (section 18, Corporation Tax Act 2009). Dual-residence is also unlikely to be possible in many other jurisdictions going forward as a result of the BEPS project.

16. It is already becoming evident that the outputs of the OECD’s BEPS project and related initiatives are reducing greatly the ability for multinational groups to achieve reduced taxation through international structures which were traditionally prevalent.

17. Measures to prevent, for example, treaty shopping, hybrid mismatches and avoidance of permanent establishment status are aimed at ensuring that, broadly, taxation reflects economic reality by countering tax advantages that might otherwise arise through “artificial” structuring.

18. The use of traditional offshore structures is likely to undergo significant evolution.

19. The current tax regimes applicable in the Eastern Caribbean are appended to this memo.